While sponges are one of the most commonly seen species on SCUBA dives as they can be difficult to identify they account for only 8% of all Seasearch Ireland records.This project is aimed at increasing the number of records of 6 of the common and easily recognisable sponges that can be reliably identified to species in the field. The identification sheet prepared shows photos and a brief description of each species in order to allow identification in the water by snorkelers or SCUBA divers.

How to get involved?

Simple enough, familiarise yourself with the 6 species below and then get out recording using the instructions below. For a more complete guide to sponge identification the Seasearch guide to Sea Squirts and Sponges of Britain and Ireland is available from the Marine Conservation Society shop.

Chocolate to dark brown sponge with many short circular branches. The surface is hispid (bristly) due to the presence of spicules that trap the silt. This silt covering can be removed from the sponge by gentle brushing to reveal the colour underneath. Found on rocks in a variety of sites it is found on all Irish coasts, though there are some gaps in the distribution of records.While this species may occasionally be confused with other rare Raspalia species the colour should allow for you to be confident in your ID.

An encrusting sponge found on bedrock and boulders this peach or pale orange sponge with a distinctive honeycomb like appearance is extremely distinctive. Found in a variety of habitats and on all Irish coasts. 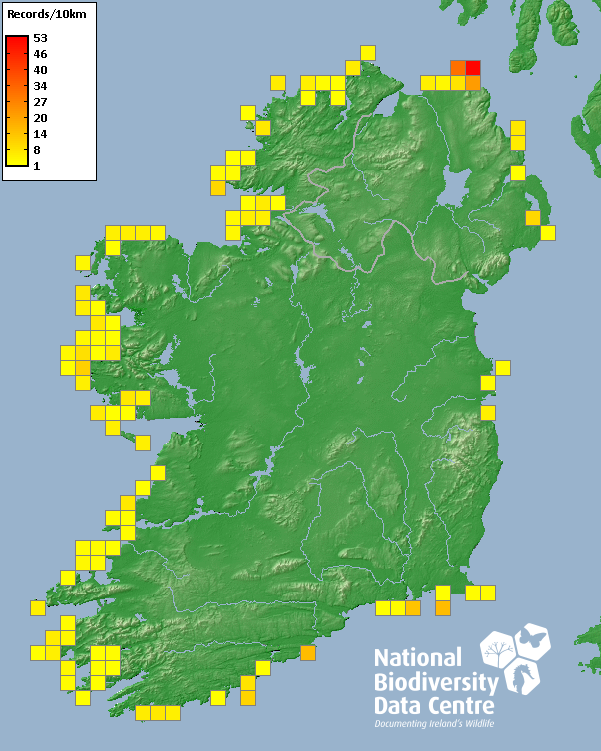 The massive form of the species is extremely distinctive with a bright yellow colour and with large circular papillae. While the boring form is less obvious it can be distinguished with practice. Typically the boring form is confused with jewel anemones (Corynactis viridis) though the confusion rarely arises in the field.

Large pale grey sponge that can occur in lobes, as low flat mass or can occur as massive form up to 50cm in size. Common on all coasts this species is extremely distinctive and is unlikely to be confused with any other species found in Irish waters.

Small pale finger shaped sponge often found growing on seaweed or other sponges. While small specimens can be difficult to identify the hairy appearance (caused by spines covering the surface of the sponge) particularly around the oscule and rounded structure.

Can be confused with Grantia compressa however Grantia is flattened in appearance, lacks the ring of hairs on the oscule and has a smooth texture.

Note: It’s unlikely that all 6 species would be present at a single site due to varying habitat requirements

Enter your name, email address, date, location and use the Data Centre’s mapping portal to locate the site.

Note: The species name for each sponge must be entered however the identification sheet contains species and common names.