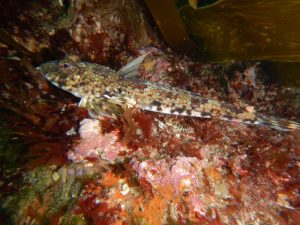 The Callionomidae family are a family with 180 species recognised worldwide. Of the three species residing in our waters, the Common dragonet (Callionymus lyra) and the Reticulated dragonet (Callionymus reticulatus) are both recorded as being seen by divers ranging from depths of 7m to 22m. Both species are understudied here and while not considered commercially important, they are a prey item for commercially important fish such as cod, may play an important role in management of prey items such as polychaete worms and small crustaceans, pelagic larvae and eggs could be important food items for other organisms.

Based on records of the National Biodiversity Data Centre (biodiversityireland.ie) and Seasearch Ireland the common dragonet is the most commonly seen dragonet in Irish waters (330 (NBDC), 277 (SsI)), followed by the reticulated dragonet (126, 22) with the spotted dragonet being extremely rare (1, 0). However, distinguishing the species apart in the field can be difficult as it requires examination of the first dorsal fin to distinguish C. lyra from C. reticulatus. Based on anecdotal evidence and records from the National Marine Monitoring Scheme sites in Galway, it is suspected that C. reticulatus is the species most commonly seen by divers rather than C. lyra (despite the name).

We think it’s high time the dragonets got some well-deserved attention and would like to invite you all on a journey of discovery. During the next six weeks all datasets will be obtained and analysed paying particular attention to the Seasearch data which has detailed records of substrate and habitat type. With these added details and some investigative work including interviews with experts and quizzes, we hope to shed more light on the abundance of the Reticulated dragonet compared to its cousin and find out just how difficult it is to identify to species in the field. With limited data available I will need all the help I can get and would invite anyone who wishes to participate to contact me. lisanihill@gmail.com , any photographs, stories, videos or anything at all could be useful. Watch this space….